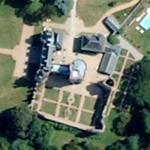 By dda @ 2009-03-20 15:56:09
@ 46.835327, -0.86196
La Flocellière, France (FR)
The first document concerning the castle dates from 1090. During the middle ages, it was one of the main fortresses in the region then known as the Bas-Poitou. The main tower (keep) was built in the thirteenth century, then enlarged in the fifteenth century, giving the structure its near present-day appearance.

Until the sixteenth century, the lords of La Flocellière belonged to the powerful Surgères family. The wife of René de Surgères, the last of the line, was a poetess who wrote in the style of Ronsard. During the Wars of Religion, the castle was the scene of several battles between Protestant and Catholic forces.
Links: www.chateaudelaflocelliere.com
404 views