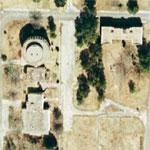 By jbottero @ 2007-10-23 12:54:06
@ 41.556585, -71.543612
Exeter, Rhode Island (RI), US
The Rhode Island School for the Feeble Minded was founded in 1907 as a farm colony for the residents to work and learn, with Dr. Joseph Ladd as the superintendent. The patient population grew quickly, and in 1909 a dormitory was erected as the other was full; the new building would be for girls only. In 1917 the name of the facility changed to The Exeter School as the term "feeble-minded" (amongst many other medical terms) were becoming objectionable at the time. As the facility grew in size and population, funding became more scarce, and the school began to deteriorate into an overcrowded place to put the state's unwanted as many other state funded institutions did at the time. In the 1960s the facility had over 1,000 patients, and was re-named the Ladd Center in memory of its first superintendent.
Links: www.opacity.us
7,731 views