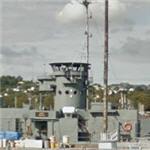 By kjfitz @ 2011-08-10 21:36:44
@ 38.105804, -122.274419
Vallejo, California (CA), US
The Landing Craft, Support (Large) — later reclassified Landing Ship Support, Large — class of amphibious assault ships were used by the United States Navy in World War II in the Pacific. They were primarily used for close support before landing forces on beaches. They also performed radar picket duty and fire fighting. They were nicknamed the "Mighty Midgets".

Only two ships are known to still exist. One has been highly modified as a fishing boat. The second was in Thailand and was kept in very similar configuration to its original (HTMS Nakha, formerly USS LCS(L)102).

The National Association of USS LCS(L) 1–130 was successful in having the HTMS Nakha transferred to the association for public display in the United States. She was officially released from the Thailand Navy on November 10 of 2007 after being returned to the USA in September of that year. As of May 2010 the USS LCS(L)102 is under restoration for eventual public display and tours in Vallejo California at the former Mare Island Naval Shipyard.
Links: en.wikipedia.org
689 views