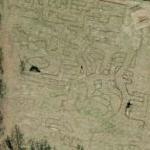 Cagle's, which has operated a 10-acre corn maze in northeast Cherokee County for seven years, now also has 56 acres of perplexing pathways near Calhoun.

Utah-based Brett Herbst, who has designed more than 1,200 corn mazes over the past decade, said he made some of the six mazes on the farm tougher than others.

One maze, when viewed from high above, pictures a sailing ship on the sea.

"That one is more difficult," said Mark Cagle, owner of the farms in Canton and Resaca.

The maze with the "Trail of Tears" theme is fairly easy, Cagle said.

Two of the mazes are reserved for haunted hayrides, he said.

The Resaca complex comprise the biggest corn maze in the world, said Herbst, who this year designed nearly 200 mazes, including one in Italy.

The mazes in Canton and Resaca are open Friday through Sunday through November. If you go on Friday or Saturday night, you might want to bring a flashlight.

While there are light towers providing some illumination, Cagle said, "it gets pretty dark around the edges."
Links: www.ajc.com
4,259 views