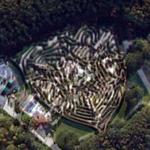 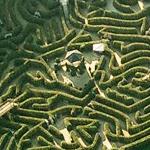 By dda @ 2006-09-14 20:43:12
@ 50.755403, 6.018778
Vaals, Netherlands (NL)
Three Lands Point is situated at the southwestern tip of the Netherlands, where the country touches both Germany and Belgium. This is reflected in the overall shape of the maze, and it's hedges represent the German eagle and two different lion symbols for Belgium and Holland. This maze is one of the world's largest permanent hedge mazes. The maze paths are crossed in several places by rows of fountains, which temporarily block the paths, rising and falling seemingly at random. The paths also pass over and under wooden bridges.
Links: www.mazemaker.com
4,672 views