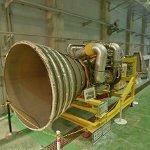 By WacoKidd110 @ 2013-02-04 12:00:32
@ 30.401667, 130.967019
Tanegashima, Japan (JP)
The LE-7 and its succeeding upgrade model the LE-7A are staged combustion cycle LH2/LOX liquid rocket engines produced in Japan for the H-II series of launch vehicles. Design and production work was all done domestically in Japan, the first major (main/first-stage) liquid rocket engine with that claim, in a collaborative effort from the National Space Development Agency (NASDA), Aerospace Engineering Laboratory (NAL), Mitsubishi Heavy Industries, and Ishikawajima-Harima. NASDA and NAL have since been integrated into JAXA. However, a large part of the work was contracted to Mitsubishi, with Ishikawajima-Harima providing turbomachinery, and the engine is often referred to as the Mitsubishi LE-7(A).
Links: en.wikipedia.org
621 views