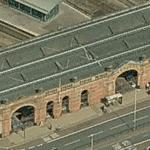 In total Leicester had four railways stations. In addition to the current Leicester station three other railway stations existed. The original station at West Bridge closed to passengers in 1928.Leicester Belgrave Road (on the Great Northern Railway)closed to passengers in 1962 and Leicester Central (on the Great Central Railway) closed in May 1969. Up until this time the current Leicester station was known as Leicester London Road. Today the heritage Great Central Steam Railway currently operates a station called Leicester North at its southern terminus in the suburb of Belgrave