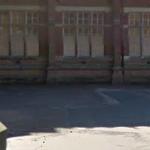 By tallturtle82 @ 2014-08-16 12:20:00
@ 52.63428, -1.136202
Leicester, United Kingdom (GB)
Richard III was the last king of the House of York. Richard perished in the Battle of Bosworth Field, the decisive battle of the War of the Roses. The war was fought over who was the rightful house to rule England. The House of York was represented by the white rose and the Lancaster, the rival family was represented by the red rose.

Richard fought bravely at Bosworth but was ultimately killed after he was surrounded. His body was transported from the field and buried at Greyfriars Church in Leicester. The church was closed in 1536 and Richard was rumored to have been tossed into the river and forgotten. The rumors were false.

The foundations of the old church and the body were found in 2012 after the University of Leicester, the Richard III Society and the Leicester City Council initiated a search. Richard's body, curved spine, head wounds and all was confirmed with DNA. The body is to be re-buried in the nearby Cathedral in Spring 2015.

A Richard III visitor's center was erected nearby and opened in July 2014.
Links: en.wikipedia.org
512 views