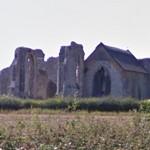 In 1363 the Abbey was transferred to Leiston, and its patron, Robert de Ufford, 1st Earl of Suffolk, devoted his last years to the building.
Links: en.wikipedia.org
455 views