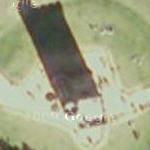 On the summit of Leith Hill is an 18th century Gothic tower, with panoramic views northwards to London and the English Channel to the south. Richard Hull of nearby Leith Hill Place (once home to the composer Ralph Vaughan Williams) built "Prospect House" in the years 1765 to 1766, later to become known as Leith Hill Tower, with the intention of raising the hill above 1,000 ft (305 m) above sea level. The tower is 19.5 metres (64 ft) high and consisted of two rooms "neatly furnished", with a Latin inscription above the door announcing that it had been built for not only his own pleasure, but also for the enjoyment of others. Hull provided visitors with prospect glasses, similar to a small telescope, through which to survey the extensive views towards London and the English Channel, each some 25 miles (40 km) away, and thirteen counties on a very clear day.

When he died in 1772, at his request he was buried under the tower, upside-down as he believed that at Judgement Day the world would be turned on its head[citation needed]. Following his death, the building was stripped of its contents, doors and windows, and fell into ruin. As a result the tower was filled with rubble and concrete, and the entrance bricked up.

In 1864, Mr Evelyn of nearby Wotton House decided to reopen it, but the concrete made this difficult, and so the additional turreted side-tower was added to allow access to the top of the tower.
Links: en.wikipedia.org
1,552 views