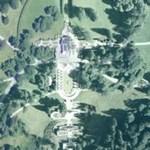 Although much smaller than Versailles, nobody can deny that the palace of the French Sun-King Louis XIV (who was an idol for Ludwig) was godfather to Linderhof. The staircase for example is a reduction of the famous Ambassador's staircase in Versailles that should be copied in its whole dimensions in Herrenchiemsee. At least the symbol of the sun that can be found everywhere in the decoration of the rooms reminds of the French absolutism that was in the eyes of Ludwig the perfect incorporation of his ideal of a God given monarchy with total royal power which was not anymore to be realised for him as an European king in the second half of the nineteenth century.

For Louis XIV of France used to give his first (léver) and last audience (coucher) of the day in his bedchamber, that room played an important part in the ceremonial life of this absolute monarch. Therefore the bedroom is the largest chamber of Linderhof Palace. Its direction to the north, however, is the complete negation of the symbolic meaning of the Versailles room and shows us the self-image of Ludwig II as a "Night-King".

The location of the palace near Ettal Abbey again presents another interesting point. Because of its architecture Ludwig saw the church of the monastery as the room where the holy grail was preserved. This fact connects the idea of a baroque palace to the one of a "medieval" castle such as Neuschwanstein and reminds of the operas of Richard Wagner whose patron Ludwig was.
Links: en.wikipedia.org
2,174 views