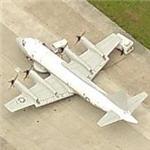 There are a bunch of them at this airport. The modifications are done by L3 Communications. This is one of two L3 facilities in the country. They also do the Rivet Joint aircraft.
Links: en.wikipedia.org, www2.l3t.com
926 views