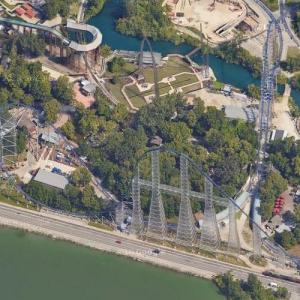 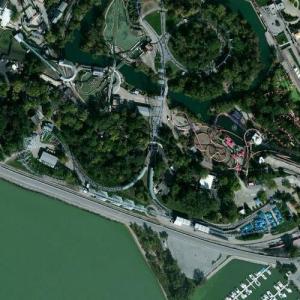 By kjfitz @ 2010-02-10 09:22:19
@ 41.48232517, -82.68900391
Sandusky, Ohio (OH), US
Millennium Force is a steel roller coaster built by Intamin AG located at Cedar Point in Sandusky, Ohio, United States. It is the fourteenth roller coaster built at the park since the Blue Streak opened in 1964. Standing 310 feet (95 m) tall at its highest point, the coaster overlooks Lake Erie. When built in 2000, it was the first roller coaster to be taller than 300 feet, and it was briefly the tallest complete circuit roller coaster in the world, before being beaten by Steel Dragon 2000, Cedar Point's own Top Thrill Dragster, and Kingda Ka at Six Flags Great Adventure. Additionally, it is the longest steel roller coaster in the United States. The only two roller coasters in the United States longer than Millennium Force are The Beast and Son of Beast, wooden roller coasters at Kings Island. It is also the first roller coaster to utilize a cable lift system, rather than a traditional chain lift. A potential chain lift was considered too heavy considering that Magnum XL-200's chain was 7 short tons (6 t) and two-thirds as tall. The cable lift uses an 800-horsepower (600 kW) motor that turns a set of sprocket gears that pulls the cable. Cable lifts were previously only used on smaller coasters in Europe. After the 2007 season, Millennium Force had given over twelve million rides total. Riders must be at least 48 inches tall to ride.

Millennium Force has been voted the number one steel roller coaster in the world in Amusement Today's Golden Ticket awards five times since the year 2001, and has never been ranked lower than number two since it opened in 2000. Millennium Force has switched the top position with Bizarro at Six Flags New England, a hypercoaster of very similar construction, three times in the last seven years.