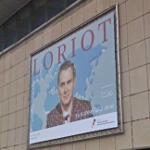 He is most well-known for his cartoons, the sketches from his 1976 television series Loriot, alongside Evelyn Hamann, and his two movies, Ödipussi (1988) and Pappa ante Portas (1991).

On the television series Unsere Besten (Our Best), Loriot was ranked the 54th best German ever. In a special comedy episode of Unsere Besten, he was ranked as the most famous German comedian ever.