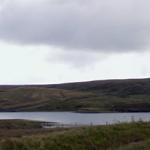 By kkeps @ 2010-10-07 16:12:37
@ 55.157171, -6.110602
Ballycastle, United Kingdom (GB)
The loch possesses a unique topographical feature known as a chalk “plug hole” that often becomes jammed with peat causing the Loughareema depression to fill. The loch then drains, often quite rapidly until the uneducated passerby would never even know it existed in the first place. Here we see that the Google Street View car was lucky enough to see the loch in its “plugged” state.
Links: www.googlesightseeing.com
649 views