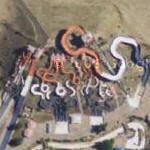 By kjfitz @ 2007-03-07 19:16:55
@ 34.948885, -116.686102
Newberry Springs, California (CA), US
Lake Delores is the original, given name of the man-made lake(s) and the surrounding site where stands a still physically-existent yet currently inoperative waterpark on Hacienda Road in the desert town of Newberry Springs, San Bernardino County, California, USA. When last open to the general public, the park itself went by the relatively recent and updated name(s) Rock-a-Hoola/Discovery Water Park.

Owned, conceived, designed, built, and subsequently operated by a local businessman -- the late John Byers -- the original park's initial, primary intent was to function as nothing more than a basic, "no-frills" private desert campground adjacent to a small man-made lake for the combined purposes of "off-road racing" over and about the surrounding desert terrain, coupled with the requisite comfort, rest, and relaxation by and for its paying guests. Mainly suited for weekend and holiday use by desert and off-road motorcycle racing ("motocross" AKA "MX") enthusiasts, over several years and for various situational, family, and economic reasons, the park grew in popularity as it gradually morphed into an attraction which became considerably more broad in scope than the park designer's original vision had first intended.

Entering the New Millennium with high-hopes and a complete makeover -- now in its second incarnation as a waterpark -- Lake Delores/Rock-A-Hoola/Discovery Waterpark and the park's new owners experienced several major setbacks. As a result, the park opened and closed several times. In 2003, Olympic Gold Medalist and former NFL All-Pro Wide Receiver Ron Brown (Oakland Raiders, St.Louis Rams) led a distinguished group of former and current professional athletes -- a fraternal/business organization known as the "Pro Players Network" -- in a reportedly serious attempt to purchase the park and turn it into a fun, creative, sports, and educational activity camp for underpriveliged children. At this point, however -- reportedly running into several roadblocks -- these plans appear to be in somewhat of a "holding pattern". The park was last open to the general public on an intermittent and relatively part-time basis during the summer of 2004.

As of this writing, the waterslides and attractions of Lake Dolores/Rock-A-Hoola/Discovery Water Park are clearly visible from Interstate 15, sixteen miles northeast of Barstow, California, just past the mid-way point from downtown Los Angeles to Las Vegas, Nevada. The future of the park, as well as the immediate, surrounding acreage, is currently the subject of major discussion, debate, and rumor within the local community. From a physical standpoint, the site itself is now patrolled by guard dogs but appears to be well-maintained and in excellent condition.
Links: en.wikipedia.org
9,422 views

Anonymous
@ 2009-01-08 03:32:59
Really Sad, I happend to stop there and was greeted by a friendly security guard and noticed a couple of dogs but everything looked in great shape. I was able to talk to the security guard and she said people were looking at buying it but as of 12-17-08 the red water slide is gone, which makes me think their is no hope for this water park. Very Sad, looked like good times were definatly had though! Hopefully someone will come up with something being that Wet and Wild was supposevely going to be condos and now the lot is for sale. Really sad. Hope to see Lake Delores re-open. That would be great.

Anonymous
@ 2009-04-22 15:35:04
I went to Lake Delores as a kid, we went about twice a summer for 5 or 6 summers. It was very memorable. I never went to Rock-a-hoola tho... Ironically my folks bought some land a mile up the road off Harvard Rd., my dad hopes to someday make something similar out there. The slides are all gone now, and from what Ive read, some punk employee sued the owner because the employee was messing around on the time clock and got badly hurt or paralyzed or something. They had to file bankruptcy to pay him.

Anonymous
@ 2011-12-31 20:56:11
They sold the big red slide to some water park in Canada... All the slides and everything are gone now. We drive past it a few times a year on the way to/from Utah. The lake is completely dried up. There's no one there and no dogs anymore as far as I know, considering the place is obviously repeatedly vandalized. It seems to be disappearing more and more every time we go past it. Really sad.. there are now signs all over the fence.

I wonder if anyone will buy it, and what they will do with it? Seems like a pretty useless lot now, I almost don't want it to be bought... I find it creepy and intriguing..