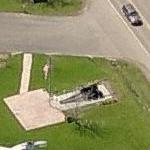 The M115 owes some of its origins to the British BL 8 inch Howitzer of the First World War, using the same Welin screw for the breech. The carriage was the same as used for the US 155 mm gun, and was also adopted by the British for their 7.2 inch Mark 6 howitzer

The M115 saw service in World War II, the Korean War, and the Vietnam War. In NATO service, its main purpose was to fire nuclear rounds, which have since been discontinued. The M115 was removed from service due to its short range.