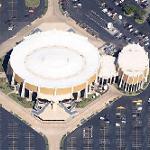 An adjacent building, smaller but similar in shape, is known as "Baby Mabee" and houses a television production studio.

It is home to the Oral Roberts Golden Eagles men's and women's basketball teams. It was Eastern Oklahoma's largest arena until the BOK Center was built.
Links: en.wikipedia.org
441 views