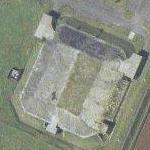 By kjfitz @ 2006-02-17 18:56:17
@ 52.3765, -0.215591
Little Stukeley, United Kingdom (GB)
The 'Magic Mountain' - a massive double-storey semi-subterranean bunker at the former RAF base at Alconbury in Cambridgeshire - was completed about 1989. It is one of the largest and most sophisticated bunkers in the United Kingdom, representing the ultimate in Cold War bunker architecture. Its role was to process intelligence data collected by the TR1 reconnaissance aircraft and to maintain their complex avionics systems. The sheer scale of this bunker and the massive investment evident in its construction identifies it as a key NATO asset during the late 1980s. Its architecture is an eloquent testimony to the constant fear of a pre-emptive attack using nuclear, chemical, or biological weapons, and the determination to continue operating even in the most extreme horrors of a possible nuclear holocaust. It also reflects the importance of the wider global theme of constant vigilance, monitoring the numbers and state of readiness of opposing forces. The Magic Mountain itself and painted murals scattered across the base were photographically recorded during the summer of 2001. The bunker and a number of associated TR1 'hardened' aircraft shelters have been put forward for protection by Scheduling.
Links: www.bunkertours.co.uk
1,914 views