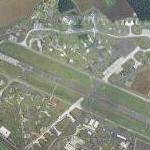 By kjfitz @ 2006-02-17 18:49:39
@ 52.376254, -0.222259
Little Stukeley, United Kingdom (GB)
Land for an airfield at Alconbury was first acquired in 1938 as a satellite landing ground for RAF Upwood, and, when war broke out, it was used by Blenheims from RAF Wyton. In the beginning facilities were rudimentary comprising a briefing room and bomb stores; in 1941 three runways were laid, and it was subsequently used by Stirlings and Wellingtons to mount raids against Germany. In August 1942 Alconbury became an American base for Liberators flying bombing missions. In December 1942 the Liberators were replaced by B-17s and Alconbury became known as Station 102. As part of the US 8th Air Force it fulfilled a variety of roles until being handed back to the RAF in November 1945.

On 1 June 1953 the airfield was reactivated as one of the bases for the US 3rd Air Force, and by 1954 major reconstruction work was underway to lay a new extended runway and construct other infrastructure, including hangars and bomb stores. The first aircraft arrived in September 1955; B-45s of the 85th Bomb Squadron, this squadron remaining until August 1959 by which time it had been re-equipped with B-66Bs. Following this departure Alconbury assumed what was to be its principal Cold War role as the home to various reconnaissance squadrons. The first to arrive were the 1st and 10th Squadrons of the 10th Tactical Reconnaissance Wing, flying at first RB-66s until they were replaced by RF-4C Phantom IIs in 1965. In 1976, the airfield acquired an additional role as the home of a tactical fighter training squadron flying Northrop F-5E Tigers. Soon after the airfield was substantially remodelled with the construction of twenty-eight hardened aircraft shelters. ‘Hush Houses’ were also built in the early 1980s to minimise engine noise during static test runs.

In 1983, TR-1s (reconnaissance ‘spy’ planes) were permanently based at Alconbury. This led to a large remodelling of the northern section of the airfield to accommodate these aircraft and their specialised mission. Work included the construction of five prefabricated ‘Ready Sheds’, thirteen extra-wide Hardened Aircraft Shelters, a Squadron Headquarters, a massive Avionics and Photography Interpretation Centre, and new concrete aprons and taxi-ways. In the late 1980s the Phantoms were replaced by thirty-eight A-10A Warthogs, ground attack aircraft. Their deployment, however, had little effect on the physical fabric of the base, although the squadron did produce some distinctive wall art. Flying ceased on 31 March 1995 and the base was subsequently released for disposal.

The Airfield site is now administered by Alconbury Developments Limited, most of the domestic site is retained by the USAFE and is used for domestic facilities and accommodation for it and its sister base of RAF Molesworth.
Links: www.bunkertours.co.uk
2,771 views