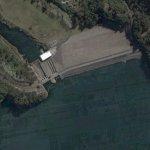 The largest earth dam in the North Island, situated on the Rangitaiki River. Construction was approved in 1959 with the scheme finally commissioned in 1967. After sustaining damage in an earthquake of Richter scale magnitude 6.3 in 1987, the scheme was decommissioned for seven months in 1988 to allow repairs including substantial strengthening of the dam to reduce it's hazard rating. This work occurred during 1997-98, immediately prior to the TrustPower purchase of the scheme. With a 61 metre head of water behind an 86 meter high dam, the Matahina station has two 36,000 kW generators producing an average annual output of 300 GWh.
Links: www.trustpower.co.nz
1,786 views