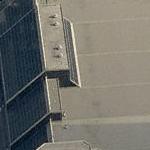 By kkeps @ 2012-06-19 17:43:46
@ 43.64364123, -79.38583704
Toronto, Canada (CA)
Metro Toronto Convention Centre (originally and still colloquially Metro Convention Centre, and sometimes MTCC), located in Downtown Toronto, Ontario at 255 Front Street West, has 600,000 square feet (56,000 m2) of space. The convention centre was completed in October 1984 and is home to the 1330-seat John Bassett Theatre. Large convention gatherings will sometimes also make use of the nearby Rogers Centre as a venue. To the east end of the complex was the former Canadian National Railway's L'Hotel CN (Toronto) hotel, in 2003 it became the 586-room InterContinental Toronto Centre. Across the street is the CBC's Canadian Broadcasting Centre. The centre is connected to Union Station through a footbridge, and is also accessible via the underground PATH system.
Links: en.wikipedia.org
551 views