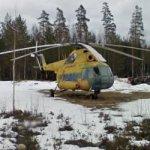 By mlc1us @ 2010-11-06 14:57:23
@ 61.347712, 27.184934
Suomenniemi, Finland (FI)
The Mi-8 Transport Helicopter is the most massively produced helicopter in the world. In Soviet Union there were developed more than 50 various modifications of this helicopter and built approximately 12 000 helicopters including 3 600 built for export. These helicopters are still built at Mil Moscow Helicopter Plant, Kazan Helicopter Plant and Ulan-Ude Aviation Plant. The Mi-8 Transport Helicopters took part in a great number of military conflicts all around the world including Afghanistan and both Chechnya wars. At the moment Mi-8 with it's various modifications are operational in over 50 countries of the world including some NATO countries.
Links: en.wikipedia.org, russianplanes.net, www.airforce.ru
823 views