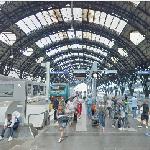 It is served by high speed lines to Bologna (to Rome and Naples) and Turin, and conventional railways to Bologna, Turin, Venice, Genoa, Domodossola (for the Simplon and Bern), Chiasso (for the Gotthard and Zürich Hauptbahnhof) and Lecco.
Links: en.wikipedia.org
1,079 views