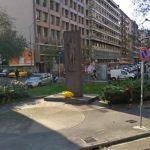 When the war ended, the site of the massacre and in memory of the martyrs who fell there was erected a memorial stone. This stone was replaced by a monument erected in August 1960 by the sculptor Giannino Castiglioni (1884-1971), located on the corner of the square and viale Andrea Doria. The monument, on the front, bears a bas-relief representing a martyr subjected to execution on the iconography of St. Sebastian, on the back is labeled "HIGH / THE NIGHT OF BOTH FELL IN THE NAME / OF FREEDOM" which follows the list of 15 fallen, the date dell'eccidio, August 10, 1944 and the symbols of the Italian Republic and the City of Milan.
Links: it.wikipedia.org
4,596 views