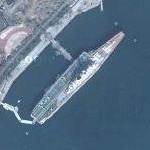 In 1995 she was sold to a South Korean businessman, and later resold to Shenzhen Minsk Aircraft Carrier Industry Co Ltd, China. Until 2006, when the company went bankrupt, Minsk was part of a military theme park in Shatoujiao, Shenzhen called "Minsk World". The aircraft carrier was put up for auction on 22 March 2006. No bids at the starting price of 128 million RMB (approx. 16 million U.S. dollars) were received, so the carrier was withdrawn from sale. On 31 May 2006, the Soviet aircraft carrier was finally auctioned off in Shenzhen for 128 million RMB.
Links: www.rydel.net
8,770 views

Analogman
@ 2006-06-21 14:50:34
Technically, she isn't an aircraft carrier but rather is classed as a heavy aircraft carrying cruiser (CVHG). This was done to get around a provision of the Montreaux Treaty (the treaty governing ship passage through the Turkish Straits) that prohibited aircraft carriers from transitting the Bosphorus or the Dardanelles. Since the ships were built in the Black Sea, they had to be called something besides aircraft carriers or the Turks wouldn't allow them passage into the Mediterranean.