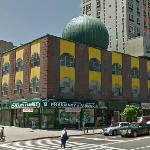 Opened as Temple No. 7 of the Nation of Islam at the Harlem YMCA in 1946, it was moved to Lenox Casino at 102 West 116th Street on the southwest corner of Lenox Avenue and it "was just a storefront in 1954 when Malcolm was named minister by Elijah Muhammad. When Malcolm X split from Elijah Muhammad in 1964, he opened a mosque named Mosque of Islamic Brotherhood at 130 West 113th Street.

Temple No. 7 was destroyed in a bombing in 1965, after Malcolm X's assassination, which forced Nation of Islam to move it to 106 West 127th Street. The temple was also renamed to Muhammad's Mosque Number Seven by the Nation of Islam .

Later Muslims in the destroyed temple's area rebuilt the structure as a proper mosque. The building was redesigned by Sabbath Brown and the mosque was renamed in honour of Malcolm X as Malcolm Shabazz Mosque or Masjid Malcolm Shabazz. In 1972, it was the location of a controversial police shooting. The new mosque has no affiliation with the Nation of Islam.
Links: en.wikipedia.org
506 views