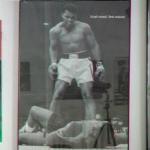 Charles L. "Sonny" Liston (c. 1932 – December 30, 1970) was an American professional boxer known for his toughness, punching power and intimidating appearance, who became World Heavyweight Champion in 1962 by knocking out Floyd Patterson in the first round. Liston failed to live up to his fearsome reputation in an unsuccessful defense of the title against Cassius Clay (Muhammad Ali); underworld connections and an early death—along with his unrecorded date of birth—added to the enigma. He is ranked number 15 in Ring Magazine's 100 Greatest Punchers of All Time.
Links: en.wikipedia.org
802 views