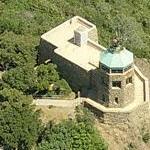 The peak is the centerpiece of Mount Diablo State Park, a state park of approximately 20,000 acres (80 km²) in area.

The summit building was constructed by the CCC (Civilian Conservation Corps) from 1939-1942.

According to a sign at the summit, it is possible to view the second greatest surface area seen from any peak in the world, exceeded only by the 19,340 foot (5,895 m) Mount Kilimanjaro in Africa. This myth was promulgated by early real estate promoter Robert Noble Burgess, who built the first auto roads to Diablo's summit, as a draw to his Mt. Diablo Estates project, c. 1914-1917. The Mt. Kilimanjaro qualifier was first added in the 1928 Standard Oil Bulletin, which described the new Standard Diablo (SD) Tower.
Links: en.wikipedia.org
1,017 views