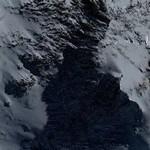 The volcano has been observed to be continuously active since 1972 and is the site of the Mount Erebus Volcano Observatory run by the New Mexico Institute of Mining and Technology.
Links: en.wikipedia.org
3,660 views