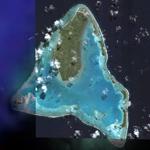 
This magnificent and remote island is the stuff of which dreams are made. It is a triangular-shaped 'almost'-atoll rising up 4000 metres from the floor of the Pacific Ocean. It consists of three volcanic and 12 coral islets (motus)

It was probably first settled around 900 AD and one of its great legendary Polynesian Outrigger canoediscoverers was Ru who named it Utataki Enua O Ru Ki Te Moana. Roughly translated, this means The Leading of a Cargo of People by Ru Over the Ocean. It can be inferred that Aitutaki was, therefore, the ultimate destination of one of the great Polynesian ocean voyages.

The first recorded discovery by Europeans was Captain Bligh on the "Bounty". He arrived on April 11 1789 and shortly afterwards the famous mutiny occurred. Bligh returned later on July 25 1792. He is credited with introducing the paw paw fruit to Aitutaki and this is now an important export product from the Cook Islands.

The first missionary to the Cooks, John Williams, landed on Aitutaki before any of the other Cooks and there is a large, airy coral block church in Arutanga, the main township, which bears testament to his success in converting the people to Christianity.

According to the IMDb, Aitutaki is the filming location of the both the 2003 movie The Legend of Johnny Lingo and the 1984 movie The Silent One.
Links: www.mapsouthpacific.com
3,809 views