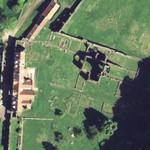 By Dania @ 2010-09-11 16:58:20
@ 54.379933, -1.310002
Northallerton, United Kingdom (GB)
Mount Grace Priory is today the best preserved and most accessible of the ten medieval Carthusian houses (charterhouses) in England. Founded in 1398 by Thomas Holland, 1st Duke of Surrey, the son of King Richard II's half-brother Thomas, earl of Kent, it was the last monastery established in Yorkshire, and one of the few founded anywhere in Britain in the period between the Black Death (1349–50) and the Reformation. Upon the abdication of King Richard, Surrey and others of the king's supporters attempted to assassinate his recently crowned successor, Henry IV, at New Year's, 1400, but were captured and executed. Holland's body was eventually recovered and, in 1412, re-buried in the charterhouse that he had founded. The orphaned priory of Mount Grace, bereft of its founder and the income that had been granted to it by Holland and King Richard, depended upon royal largesse for its income for more than a decade.

Nicholas Love, the rector of the foundering Carthusian foundation, succeeded in creating a link between Mount Grace and the Lancastrian administration, in part by submitting his "Mirror of the Blessed Life of Jesus Christ" to Thomas Arundel, archbishop of Canterbury, Henry IV's chancellor, in support of the archbishop's campaign against Wycliffism, and by granting Arundel confraternity in the spiritual benefits of Mount Grace in exchange for his provision of material benefits. From 1412 onward, Arundel and Thomas Beaufort, duke of Exeter, the king's uncle, provided material support for Mount Grace; in 1410 the house was formally incorporated into the order, and Love named as its first prior.

Mount Grace became an important locus for the production and preservation of contemplative and devotional texts: among writers professed as monks there were John Norton and Richard Methley (the latter known for his Latin translations of "The Cloud of Unknowing" and of the anonymous English translation of Marguerite Porete's "Mirror of Simple Souls"). The only surviving manuscript of "The Book of Margery Kempe" also belonged to Mount Grace Charterhouse. The priory was closed in 1539 during the dissolution of the monasteries by King Henry VIII.
Links: en.wikipedia.org
352 views