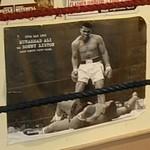 Referee Jersey Joe Walcott, a former world heavyweight champion himself, appeared confused after Ali refused to retreat to a neutral corner. Instead, Ali stood over his fallen opponent, gesturing and yelling at him, "Get up and fight, sucker!"

The moment was captured by ringside photographer Neil Leifer in what became one of the most iconic images in sport, chosen as the cover of the Sports Illustrated special issue, "The Century's Greatest Sports Photos".

Ali then raised his fists in the air celebrating the knockdown.
Links: en.wikipedia.org
934 views