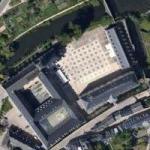 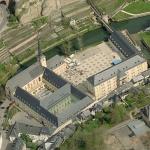 By neotrix @ 2011-02-25 06:52:53
@ 49.61064988, 6.13680889
Luxembourg, Luxembourg (LU)
Neumünster Abbey is a public meeting place and cultural centre, located in the Grund district of Luxembourg City in southern Luxembourg. After the original Benedictine Abbey on the Altmünster Plateau had been destroyed in 1542, the monks built a new abbey or Neumünster in 1606 in the Grund. This in turn was destroyed by fire in 1684 but was rebuilt on the same site in 1688 and extended in 1720. After the French revolution, it served as a police station and prison before becoming a barracks for the Prussians after Napoleon's defeat in 1815. From 1867, it once again became a state prison. Since 1997, it has been the home of the European Institute of Cultural Routes. During World War II, the Nazis used the Abbey to imprison political resisters to their occupation of Luxembourg. Among the most notable of those political prisoners was Luxembourg's best-known sculptor Lucien Wercollier.
Links: en.wikipedia.org
967 views