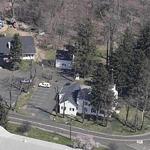 When its congregation was established in 1734, it was the first by a group of English settlers in New York west of the Hudson River. The building is the second oldest extant church in the county. In 1863 a school was built on nearby property and used by the local school district; it later became the oldest continuously-used public school building in the county. In 1977 the church and school, along with some other outbuildings, were listed on the National Register of Historic Places as the English Church and Schoolhouse.
Links: en.wikipedia.org
540 views