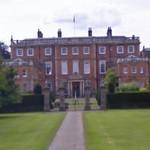 The manor of Newby was sold by the Crossland family to Sir Edward Blackett MP in the 1690s. He demolished the old manor house and in 1697 built a spacious mansion designed with the assistance of Sir Christopher Wren.

The estate was acquired by William Weddell MP in 1748 and the house was improved and enlarged during the 1760s. The interior was remodelled several architects contributing, including Robert Adam.

The present owners, the Compton family, descended from William Weddell, have restored the property and the Hall and gardens are open to the public. The River Ure runs along the south side of the grounds of Newby Hall. It has magnificent herbaceous borders and extensive woodland walks, as well as the usual collections of furniture, painting and precious artefacts within the house.

In 1973, a miniature railway was constructed, later enlarged in 1985. Running along the bank of the river, the train is pulled by a 1/5th scale model of the Royal Scot (6100) on Sundays and Bank Holidays. At other times the train is pulled by the 'Countess De Grey' or 'Lady Mary Vyner', LPG-powered Diesel-Electric locomotives.

In 1979, the newly-constructed adventure playground was opened by Sir Jackie Stewart.

Newby Hall is open to the public from 21 March until 1 October.
Links: en.wikipedia.org
946 views