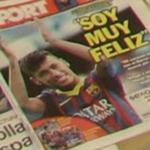 At the age of 19, Neymar won the 2011 South American Footballer of the Year award, after coming third in 2010. He followed this up by winning it again in 2012. In 2011 Neymar received nominations for the FIFA Ballon d'Or, where he came 10th, and the FIFA Puskás Award, which he won. He is known for his acceleration, speed, dribbling and finishing. His playing style has earned him critical acclaim, with fans, media and former players drawing comparisons to Argentine forward Lionel Messi and former Brazil player Pelé, who has called Neymar "an excellent player".
Links: en.wikipedia.org
897 views