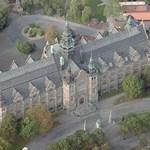 By DonMartini @ 2007-10-20 03:11:11
@ 59.32934889, 18.09347062
Stockholm, Sweden (SE)
The Nordic Museum (Swedish: Nordiska museet) is a museum located on Djurgården, an island in central Stockholm, sweden, dedicated to the cultural history and ethnography of Sweden from the Early Modern age (which for purposes of Swedish history is said to begin in 1520) until the contemporary period. The museum was founded in the late 19th century by Artur Hazelius, who also founded the open-air museum Skansen, for long part of the museum, until the institutions were made independent of each other in 1963.

The present building, the designed of Isak Gustaf Clason, was completed in 1907. Originally, it was intended to be a national monument housing the material inheritance of the nation. It was, however, only half-completed for the Stockholm Exposition 1897, and it never was completed to the extent originally planned, three times the actual size. It takes its style from Dutch-influenced Danish Renaissance architecture (e.g. buildings such as Frederiksborg Palace) rather than any specifically Swedish historical models. The core of the "cathedralesque" building is taken up by a huge main hall passing through all the stories up to the roof and dominated by the enormous sculpture of King Gustav Vasa, the Swedish so called founder-king. For the construction, brick and granite was used for the walls, while concrete was used for the roof.
Links: en.wikipedia.org
664 views