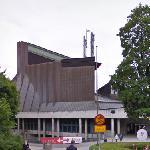 By kkeps @ 2010-01-22 19:59:32
@ 59.328879, 18.092421
Stockholm, Sweden (SE)
The Vasa Museum (Swedish: Vasamuseet) is a maritime museum in Stockholm, Sweden. Located on the island of Djurgården, the museum displays the only almost fully intact 17th century ship that has ever been salvaged, the 64-gun warship Vasa that sank on her maiden voyage in 1628. The Vasa Museum opened in 1990 and, according to the official web site, is the most visited museum in Scandinavia. Together with other museums such as Stockholm Maritime Museum, the museum belongs to the Swedish National Maritime Museums (SNMM).
Links: en.wikipedia.org, virtualglobetrotting.com
881 views