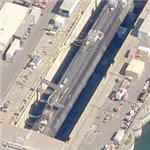 Bangor Sub Base manages the third largest collection of nuclear weapons in the country, with approximately 1,700 Trident missiles either stored at its hill-top depot, or onboard its fleet of eight Trident submarines which still roam the seas on secret missions. The base covers over 7,000 acres on the shores of Hood Canal, in Puget Sound, and was activated as a sub base in 1977, after being established as a munitions depot in World War Two. Base closures elsewhere have led to recent growth at Bangor, and now over 10,000 people work at the base.
Links: clui.org
2,354 views