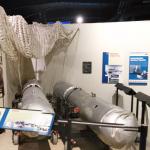 Of the four Mk28-type hydrogen bombs the B-52G carried, three were found on land near the small fishing village of Palomares, Spain. The fourth, which fell into the Mediterranean Sea, was recovered intact after a 2½-month-long search.