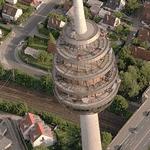 By adrbr @ 2008-02-19 16:32:19
@ 49.423696, 11.039479
Nuremberg, Germany (DE)
The Fernmeldeturm Nürnberg, the tallest structure in Bavaria, is the Nürnberg telecommunication tower, also called the Nürnberger Ei (Egg of Nuremberg) because of its egg-shaped tower basket in a height of 185 metres, is 292 metres high and was built between 1977 and 1980 according to blueprints by architect Erwin Heinle. The tower basket accommodates transmission mechanisms for Frequency modulation, DAB, UMTS, pager, amateur radio and a microwave radio relay link and – closed since 1991 – a rotating restaurant and a prospect platform. Responsible operator is the DFMG Deutsche Funkturm (German radio tower) GmbH, a subsidiary of Deutsche Telekom based in Münster. From 22 January 2003 to 4 April 2003 the Nürnberg telecommunication tower also served for the spreading of the program of megaradio on mediumwave frequency 945 kHz. For this a wire antenna was strung along the tower shaft, from the top of the tower to the roof of an operating building near the tower.
1,199 views