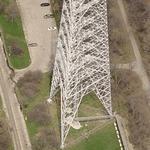 By adrbr @ 2008-02-18 21:34:15
@ 43.091213, -87.897398
Milwaukee, Wisconsin (WI), US
The WITI Tower was completed in August of 1962 and was briefly the tallest free-standing tower in the world, rising 1078 feet. (Tokyo Tower had been the world's tallest, and after the construction of WITI's tower, it added additional members to regain the title.) For many years, it was the tallest free-standing tower in the United States. The Bentley Company was the foundation contractor for the Dresser Ideco tower, which was erected by the Seago Construction Co.

The village of Shorewood, Wisconsin allowed WITI to build the tower on a piece of privately-owned land that might have completed Estabrook Parkway along the Milwaukee River. Doing so added to the village's tax base. The WTMJ-TV and WISN-TV towers were nearby, and locating the tower there meant that Milwaukee TV viewers could point their antennas in the same general direction. However, there was no room for guy-wires on the property, and as such the tower had to be free-standing. In August of 1962, construction of a 1078 foot tower at East Capitol Drive and Estabrook Parkway was completed. It was formally dedicated on 9 October 1962. WMVS leased space on the tower for many years.

WITI was looking for a way to make the tower a Milwaukee landmark, and in October of 1963, the station received permission from the Shorewood village board to install lights on it. Shortly thereafter, approximately 2000 25 watt lights were installed. Station manager Roger LeGrand then coined the phrase "Milwaukee's Tower of Light". Some neighbors objected. The Shorewood village attorney opined that the lighted "6" sign might violate the village's lighted sign ordinance, but that the lights affixed to the tower's legs were legal. The village later declared the lights and the sign to be legal. (Except for special requests - such as to aid navigation on Lake Michigan during sailing races - the tower was only lit from dusk until midnight.)

The lights stayed on until the energy crisis of 1973-74, when at the suggestion of a viewer they were turned off. They were finally removed in 2003 when the station began converting the tower for digital TV.
Links: en.wikipedia.org
2,461 views