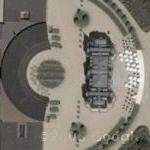 jdubble07
@ 2012-06-10 07:27:10
This is the former estate of Baron James-Edouard de Rothschild known as Château des Fontaines. Its main façade pays tribute to King Henri IV’s Place des Vosges and Place Dauphine in Paris. The pointed cylindrical towers add a medieval touch. The central section of the main building is inspired by the British and Dutch styles of the Northern Renaissance.

Baron James-Edouard de Rothschild acquired the property in 1878. He was well-versed antiquarian and a passionate lover of books, and moved in the most erudite circles. He began work on the Château, but did not live to see it finished, dying in 1881 at the age of 37. His widow, the “Baroness James” completed the estate in 1892 and passed it on to her son Henri in 1895.

Jesuit monks acquired Les Fontaines in the 1950s, building a vast library and living quarters open to researchers from all horizons and organising colloquiums on a great diversity of subjects

At the dawn of the 21st Century, CapGemini chose the site to build its Campus, thus perpetuating its vocation as a place of knowledge and international exchange.