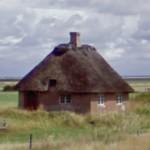 Besides his salary he also recieved his meals which he at at the homes of the pupils.

The pupils also had jobs to do in the schoolbuilding. The girls had to clean the classroomand the boys was responsible for the fireplace was lit.

The school is part of Rømø Museum under the Danish National Museum in Copenhagen.
592 views