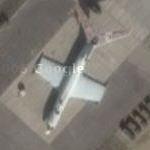 By kjfitz @ 2006-06-25 02:24:34
@ 42.880776, 47.665493
Kaspiysk, Russian Federation (RU)
Wing-In-Ground (WIG) effect craft take advantage the fact that the aerodynamic efficiency of a wing, and particularly its lifting capacity, improves dramatically when is operated within approximately one-half of its span above ground or water, in what is termed ground effect. If the wing’s natural accelerated flow passing over it is further accelerated by the high-velocity exhaust of a turbojet engine, the lifting capacity of the wing is even more greatly enhanced. In 1966 the Central Hydrofoil Design Bureau under Rostislav Alekseev produced a gargantuan "ekranoplan" ("surface plane") combining the smooth hull form of a ship with stub wings, a large vertical fin and horizontal tail. The craft featured ten engines: eight mounted in two clusters of four directly behind the cockpit to provide augmented lift, and two on the vertical fin to provide cruise power. This machine, which American intelligence organizations dubbed the Caspian Sea Monster, could lift 540 tons and cruise at over 300 mph at an altitude of over 10 feet. Alekseev developed a smaller military WIG, the Lun ("Dove"), armed with six large antishipping cruise missiles perched unaerodynamically on its back. This led to the jet-and-turboprop-powered Orlyonok ("Little Eagle," NATO name Orlan), intended as an amphibious assault craft. The apparent success of these machines hid some very real problems, not least of which were serious stability and control deficiencies, as well as tremendous power requirements to get off the water.
Links: fas.org
1,335 views