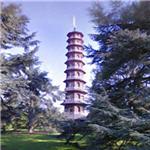 The Pagoda was completed in 1762. The ten-storey octagonal structure is 163 ft (nearly 50 m) high and was, at that time, the tallest reconstruction of a Chinese building in Europe. It tapers, with successive floors from the first to the topmost being 1 ft (30 cm) less in diameter and height than the preceding one.

The original building was very colourful; the roofs being covered with varnished iron plates, with a dragon on each corner. There were 80 dragons in all, each carved from wood and gilded with real gold.

There have been several restorations, mainly to the roofs, but the original colours and the dragons have not been replaced, though the question of replica dragons was discussed in 1979.
Links: www.kew.org
568 views