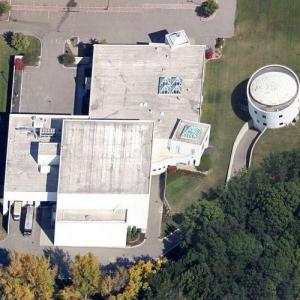 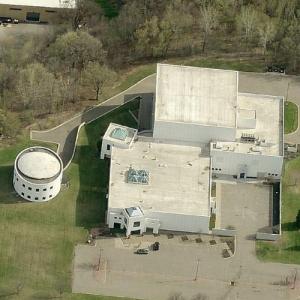 Constructed by BOTO Design Inc., an architecture firm in Santa Monica, California, Paisley Park Studios is 55,000 square feet and cost $10 million to construct. Prince was known to host events and parties on the grounds, and there was plenty of room to do so. There are two state-of-the-art recording studios, administrative offices, a performance area, rehearsal room, and a 12,400 square foot sound stage.

Paisley Park Records was also housed in the creative-compound. It started in 1985 after the commercial success of Purple Rain, one of Prince’s crowning jewels that secured his spot as music royalty. Prince produced eight multi-platinum albums with Paisley Park Records, including ‘Around the World in a Day’ which features the studio’s namesake song, as well as two number one singles: ’Kiss’ and ‘Cream.’ Prince went on to record almost 30 albums at Paisley Park Studios, even after the record label dissolved in 1994.

After Prince's death, the exterior of Paisley Park Studios has become a memorial shrine to the late artist. Messages of remembrance, insignia of his ‘Artist Formerly Known As,’ and the color purple are propped up outside of the estate walls. Rumor has it there is a vault filled with unreleased Prince songs inside. Let’s hope we haven’t heard the last song out of Paisley Park Studios quite yet.
Links: en.wikipedia.org
28,503 views