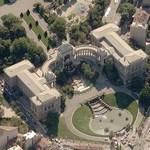 By DonMartini @ 2007-07-14 07:10:23
@ 43.304075, 5.39466
Marseille, France (FR)
The Palais Longchamp, 2km east of the port at the end of boulevard Longchamp (bus #80 and #41, or Mº Longchamp-Cinq-Avenues), forms the grandiose conclusion of an aqueduct that brought water from the Durance to the city. Although the aqueduct is no longer in use, water is still pumped into the centre of the colonnade connecting the two palatial wings. Below, an enormous statue looks as if it honours some great feminist victory – three muscular women above four bulls wallowing passively in a pool from which a cascade drops four or five storeys to ground level.

The palace's north wing is the city's Musée des Beaux-Arts (Thurs–Sun 10am–noon & 2–6.30pm; €2, free Sun morning), a hot and slightly stuffy place, but with a fair share of delights. Most unusual, and a very pleasant visual treat, are three paintings by Françoise Duparc (1726–76), whose first name has consistently found itself masculinized to François in catalogues both French and English. The nineteenth-century satirist from Marseille, Honoré Daumier, has a whole room for his cartoons. Plans for the city, sculptures and the famous profile of Louis XIV by Marseille-born Pierre Puget are on display along with graphic contemporary canvases of the plague that decimated the city in 1720.

Northwest of the Palais Longchamp, at the end of boulevard Mal-Juin, stands the new Hôtel du Département (Mº St-Just). Deliberately set away from the centre of town in the run-down St-Just–Chartreux quartier, the seat of local government for the Bouches-du-Rhône département was the biggest public building to be erected in the French provinces in the twentieth century. It was designed by the English architect William Alsop, who used his hallmark ovoid glass tube shapes above and alongside vast rectangular blocks of blue steel and glass. The Hôtel's great glass foyer is accessible during working hours, and the tourist office can arrange architectural tours.
Links: fr.wikipedia.org
790 views