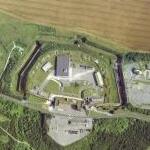 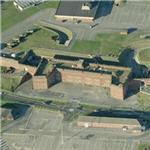 By kjfitz @ 2006-04-15 00:50:05
@ 50.85841407, -1.10949975
Portsmouth, United Kingdom (GB)
Fort Southwick is one of the forts found on Portsdown Hill, which overlooks the naval base of Portsmouth in the county of Hampshire, England. It is the highest fort on the hill, and holds the water storage tanks for the other forts, supplying them via a brick lined aqueduct. Construction was started in 1861 and completed by 1870. It was designed to house a large compliment of men (about 220) in a crescent-shaped barrack block. Its north projection has one full caponier to defend the dry ditch, and has two smaller demi-caponiers at the corners. A small musketry gallery crosses the ditch at the south-west angle to cover a minor branch of the ditch. Mortar batteries of five mortars each can be found set into the rampart behind the demi caponiers.

A central spiral staircase from the surface gives access to four main tunnels running radially outward from it at uneven angles. These tunnels lead to the barrack block and caponiers, and past the magazine.

The communications "nerve centre", Underground Headquarters or UGHQ, for operation Overlord was in a secret network of tunnels located 100 ft (30 m) underneath Fort Southwick during the Second World War, well out of reach of any bombs of the era. The call sign of this base was 'MIN'.

Although disarmed in 1906, the fort was retained by the military as a barracks, and also used to train soldiers how to capture and hold a fort. It became a demobilisation centre for three years after the First World War. The fort was part of the Admiralty Research Establishment until 2002, when all operational use of the fort ceased. It was sold by the Ministry of Defence in July 2003 to the "Fort Southwick Company Limited", who intend to convert the barrack block into luxury apartments.
Links: en.wikipedia.org
874 views